Geobiology studies the relationship between the earth (GEA) and living beings (BIOS). It deals with the biological effects that terrestrial geology has on people and combines the knowledge of our ancestors with the state-of-the-art research carried out by geologists, engineers, physicians, biologists and other researchers.

This study of the environment has come to us since ancient times. Historically, civilizations relied on the observation of nature to establish where they settled. In China they developed feng-shui, an art that studied the positive influence of spaces on the people who occupy them and that avoided energetically altered spaces.

Closer to home, in Rome, they used a methodology far removed from current Western standards. Before choosing the locations of the cities, they would let a flock of sheep graze, and after their slaughter, they would check the condition of their livers.

Similar examples are found in all cultures, from the Arabs to the Indians of America. Today, it combines perception with the use of the latest technology.

The movement of groundwater and its friction with its environment can generate an electromagnetic field. In turn, variations in electrical potential and radioactivity are usually measured vertically from the place where it flows.

Geological faults are ground fractures that facilitate the release of radon gas and natural radiation to the surface. In turn, the Earth’s magnetic field is also increased.

Geobiology also studies some networks that extend across the planet. The best known was discovered in the middle of the 20th century by Dr. Ernst Hartmann, a mesh where low intensity natural radiation is concentrated.

It is believed that people today are less resistant than before to natural influences, possibly due to a stress load, weakening of the human immune system or increased artificial radiation and pollution.

The effects of natural radiation on people’s health are individually very different. People who sleep on a geological disturbance usually suffer from sleep disorders (especially in children) and wake up tired, exhausted or sore.

Other typical discomforts after long stays in geologically altered spaces are nervousness, fatigue or headache.

In animals, species are observed that move away from these natural influences to rest, such as dogs. Cats, bees or ants, on the other hand, choose disturbed places whenever possible.

The geobiological study of a house or office identifies and evaluates the possible risk factors for the health of people who are in the areas of greater permanence, such as places of study or rest.

By applying protocols, such as the one developed by the Institut für Baubiologie, the study of geobiology determines in a contrasted and reproducible way the best location for people in their bedroom, living room or office. 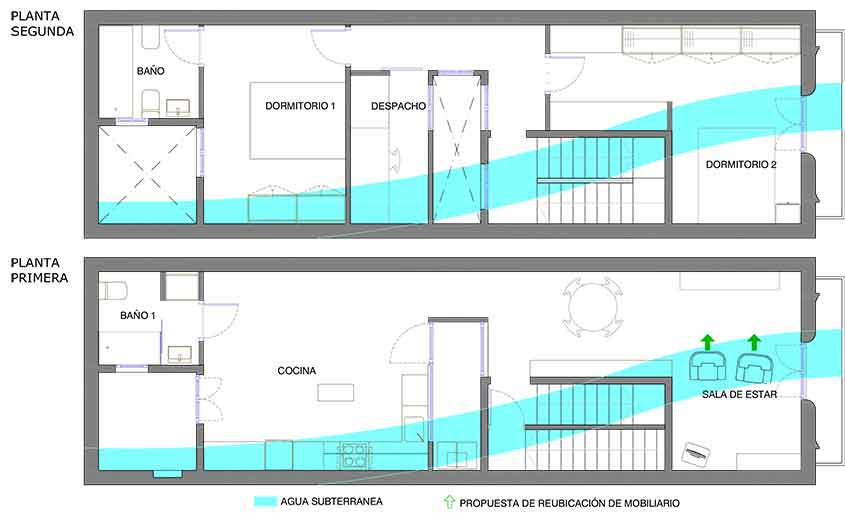 Want to see the geobiological study?

Want to see the geobiological study?